Awaiting the Heavenly Country: The Civil War and America's Culture of Death 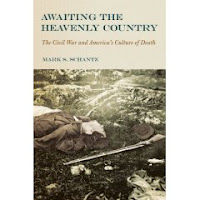 From the publisher:
"Americans came to fight the Civil War in the midst of a wider cultural world that sent them messages about death that made it easier to kill and to be killed. They understood that death awaited all who were born and prized the ability to face death with a spirit of calm resignation. They believed that a heavenly eternity of transcendent beauty awaited them beyond the grave. They knew that their heroic achievements would be cherished forever by posterity. They grasped that death itself might be seen as artistically fascinating and even beautiful." -- from Awaiting the Heavenly Country

How much loss can a nation bear? An America in which 620,000 men die at each other's hands in a war at home is almost inconceivable to us now, yet in 1861 American mothers proudly watched their sons, husbands, and fathers go off to war, knowing they would likely be killed. Today, the death of a soldier in Iraq can become headline news; during the Civil War, sometimes families did not learn of their loved ones' deaths until long after the fact.

Did antebellum Americans hold their lives so lightly, or was death so familiar to them that it did not bear avoiding? In Awaiting the Heavenly Country, Mark S. Schantz argues that American attitudes and ideas about death helped facilitate the war's tremendous carnage. Asserting that nineteenth-century attitudes toward death were firmly in place before the war began rather than arising from a sense of resignation after the losses became apparent, Schantz has written a fascinating and chilling narrative of how a society understood death and reckoned the magnitude of destruction it was willing to tolerate.

Schantz addresses topics such as the pervasiveness of death in antebellum America; theological discourse and debate on the nature of heaven and the afterlife; the rural cemetery movement and the inheritance of the Greek revival; death as a major topic in American poetry; African American notions of death, slavery, and citizenship; and a treatment of the art of death--including memorial lithographs, postmortem photography and Rembrandt Peale's major exhibition painting The Court of Death.

Awaiting the Heavenly Country is essential reading for anyone wanting a deeper understanding of the Civil War and the ways in which antebellum Americans comprehended death and the unimaginable bloodshed on the horizon.

"The premise of this very interesting and very satisfying book is that an antebellum American culture of death contributed mightily, even decisively, to the destructive nature of the Civil War. Mark S. Schantz's excellent research melds with his deep knowledge of the war in making persuasive links between antebellum culture and Civil War behaviors--North and South, male and female, black and white, home front and battlefield."--David Waldstreicher, Temple University

"Awaiting the Heavenly Country is an eloquent and insightful analysis of the culture of death and dying in antebellum America. Mark S. Schantz argues that the carnage of the Civil War may perhaps best be explained by a culture that embraced several anesthetizing notions about death: the idea that death was ennobling, that it ushered the deceased into a materially and emotionally rich heavenly existence, that the body itself could be purified and restored in the act of death. Schantz is a generous and sympathetic guide to the mind-numbing bloodletting of the Civil War who manages to explain the inexplicable." -- Susan Juster, University of Michigan

From CWBN:
The exact day of release for this May title is unknown.