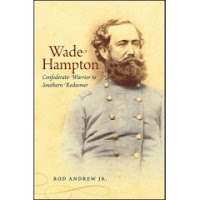 From the publisher:
Few Southern elites gave more to the Confederate cause or suffered more in its defeat than General Wade Hampton III of South Carolina. One of the South's most illustrious military leaders, Hampton was for a time the commander of all Lee's cavalry and at the end of the war was the highest-ranking Confederate cavalry officer. Yet for all Hampton's military victories, he also suffered devastating losses. He lost a beloved son and a brother, his own home as well as his grandfather's ancestral mansion, and his vast personal fortune. He failed to deter Sherman's legions from capturing his hometown of Columbia and was blamed for the inferno that destroyed it. Previous studies of Hampton have leaned toward hero worship or taken a political approach that considered his personal history irrelevant. Rod Andrew's critical biography demonstrates that Hampton's life is essential to understanding his influence beyond the battlefield and his obsession with vindication for the South.

Andrew's analysis of Hampton sheds light on his critical role during Reconstruction as a conservative white leader, governor, U.S. senator, and Redeemer; his heroic image in the minds of white Southerners; and his positions and apparent contradictions on race and the role of African Americans in the New South. Andrew also shows that Hampton's tragic past explains how he emerged in his own day as a larger-than-life symbol—of national reconciliation as well as Southern defiance.

Rod Andrew Jr. is associate professor of history at Clemson University and a lieutenant colonel in the U.S. Marine Corps Reserve. He is author of Long Gray Lines: The Southern Military School Tradition, 1839-1915 (from the University of North Carolina Press).