Abolitionists Remember: Antislavery Autobiographies and the Unfinished Work of Emancipation 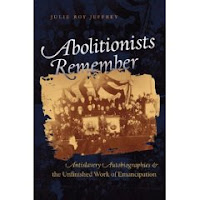 From the publisher:
In Abolitionists Remember, Julie Roy Jeffrey illuminates a second, little-noted antislavery struggle as abolitionists in the postwar period attempted to counter the nation's growing inclination to forget why the war was fought, what slavery was really like, and why the abolitionist cause was so important.

In the rush to mend fences after the Civil War, the memory of the past faded and turned romantic—slaves became quaint, owners kindly, and the war itself a noble struggle for the Union. Jeffrey examines the autobiographical writings of former abolitionists such as Laura Haviland, Frederick Douglass, Parker Pillsbury, and Samuel J. May, revealing that they wrote not only to counter the popular image of themselves as fanatics, but also to remind readers of the harsh reality of slavery and to advocate equal rights for African Americans in an era of growing racism, Jim Crow, and the Ku Klux Klan. These abolitionists, who went to great lengths to get their accounts published, challenged every important point of the reconciliation narrative, trying to salvage the nobility of their work for emancipation and African Americans and defending their own participation in the great events of their day.

Julie Roy Jeffrey is professor of American history at Goucher College and author of The Great Silent Army of Abolitionism: Ordinary Women in the Abolitionist Movement (from the University of North Carolina Press).