Lincoln's Assassins: Their Trial and Execution 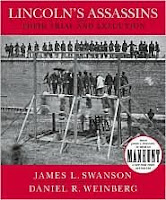 From the publisher:
Acclaimed as the definitive illustrated history of Abraham Lincoln's assassination, Lincoln's Assassins, by James L. Swanson and Daniel R. Weinberg, follows the shocking events from the tragic scene at Ford's Theatre to the trial and execution of Booth's co-conspirators. For twelve days after the president was shot, the nation waited breathlessly as manhunters tracked down John Wilkes Booth—the story that was brilliantly told in Swanson's New York Times bestseller, Manhunt. Then, during the spring and summer of 1865, a military commission tried eight people as conspirators in Booth's plot to murder Lincoln and other high officials, including the secretary of state and vice president. Few remember them today, but once the names Mary Surratt, Lewis Powell, David Herold, George Atzerodt, Edman Spangler, Samuel Arnold, Michael O'Laughlin, and Dr. Samuel Mudd were the most reviled and notorious in America.

In Lincoln's Assassins, Swanson and Weinberg resurrect these events by presenting an unprecedented visual record of almost 300 contemporary photographs, letters, documents, prints, woodcuts, newspapers, pamphlets, books, and artifacts, many hitherto unpublished. These rare materials, which took the authors decades to collect, evoke the popular culture of the time, record the origins of the Lincoln myth, take the reader into the courtroom and the cells of the accused, document the beginning of American photojournalism, and memorialize the fates of the eight conspirators.

Lincoln's Assassins is a unique work that will appeal to anyone interested in American history, Abraham Lincoln, the Civil War, law, crime, assassination,nineteenth-century photographic portraiture, and the history of American photojournalism.

James L. Swanson is the author of the New York Times bestseller Manhunt: The 12-Day Chase for Lincoln's Killer. He is an attorney who has written about history, the Constitution, popular culture, and other subjects for a variety of publications, including the Wall Street Journal, American Heritage, Smithsonian, and the Los Angeles Times. Mr. Swanson serves on the advisory council of the Ford's Theatre Abraham Lincoln Bicentennial Campaign and is a member of the advisory committee of the Abraham Lincoln Bicentennial Commission.