Guardian of Savannah: Fort Mcallister, Georgia, in the Civil War and Beyond 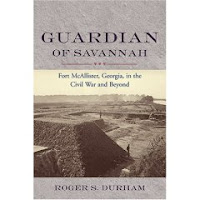 From the publisher:
Built out of sand and mud and designed to serve as the southern anchor in the coastal defenses of Savannah, Georgia, Fort McAllister was constructed in June 1861 on the Great Ogeechee River, twelve miles south of the Savannah River. Roger S. Durham offers a comprehensive history of the fort's construction, strategic importance during the Civil War, and postwar restoration in this vivid account of how an earthen defense withstood not only devastating naval assaults but also the effects of time. Durham intertwines historical facts with human fates through frequent use of primary sources, letting the fort's defenders and attackers speak for themselves and bringing readers into the fiery heat of battle.

Two innovations in warfare wrought by the Civil War were the rifled cannon--which proved detrimental to the masonry construction of Fort Pulaski at the mouth of the Savannah River--and the ironclad warship, but neither could compromise the earthen parapets of Fort McAllister. Over the course of the war, McAllister's original four-battery design was augmented to include twenty-two guns, making the fort a much more difficult challenge to Union assaults. The monitor USS Montauk was twice summoned to take Fort McAllister and twice failed. In a third Union attempt, three ironclads and a supporting fleet of wooden gunboats bombarded the fort for seven hours, though the defenders suffered no casualties and the fort withstood the blasts. In all, seven unsuccessful naval attacks were made against the fort. McAllister's final threat did not come from the water but from the western reaches of the state. In December 1864 General William T. Sherman's famed March to the Sea negated the viability of coastal defenses, and Fort McAllister, like Savannah itself, fell at last.

Fort McAllister's story did not end with the war. In the 1930s the site was owned by the industrialist Henry Ford, who was instrumental in the initial preservation efforts to restore the fort as a historical monument. Ownership later passed to the International Paper Company, which in turn deeded the land to the State of Georgia. The historical site was opened to the public in 1963, on the centennial of the bombardments by the Union ironclads.

Durham's harrowing account of life and combat at Fort McAllister, and of the subsequent restoration, is augmented by twelve maps and sixty photographs--including rare images of Sherman's troops at the end of the March to the Sea and of early preservation initiatives.

Roger S. Durham is the director of the U.S. Army Heritage Museum in Carlisle Barracks, Pennsylvania. Durham is a graduate of the University of Wisconsin and Georgia Southern University. His other books include High Seas and Yankee Gunboats: A Blockade-Running Adventure from the Diary of James Dickson and Fort McAllister.

From CWBN:
This well-written and interesting volume is one we can recommend to readers with interests in fortifications, seacoast defense, and naval artillery.