Shades of Gray: A Novel of the Civil War in Virginia 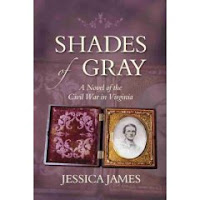 From the publisher:
Discover the fine line between friends and enemies in this epic love story that captures the emotions and fears of the country as war sweeps the land. This debut novel by Jessica James has received critical acclaim from Civil War authors and historians, as well as lovers of romance and historical fiction. Called “a sympathetic, loving portrait,” by the Historical Novel Society and “well written and expertly executed” by the Book Review Journal, Shades of Gray takes readers across the rolling hills of northern Virginia in a page-turning tale of courage as a Confederate cavalry commander and a Union spy defend their beliefs, their country and their honor.

“… Exciting, intense, romantic, and thrilling from start to finish. The most balanced book on the War Between the States I have ever read.” – Bob O’Connor, Author of The Virginian Who Might Have Saved Lincoln

“I haven’t enjoyed a book so much in years! Shades of Gray is an incredible achievement and a treasure.” – Virginia Morton, Historian/ Author of “Marching Through Culpeper”
–
“[James] has drawn a picture filled with conflict and love, loyalty and betrayal, history and romance, and a passion of lives lived in the moment.” – Jim Miller, Civil War Notebook

“…The Southern Confederacy exhibited extraordinary valor and devotion and high honor. This should never be forgotten by Americans. As long as there are writers like Jessica James, there is no danger of such forgetting.” - Clyde N. Wilson, Distinguished Professor Emeritus of History, University of South Carolina

“Well written and expertly executed… You cannot leave this book unchanged in your understanding of the souls of the Civil War.” – Heather Froeschl, Book Review Journal

“Re-enactors, historians, & followers of The War for Southern Independence will love this novel! It’s fast moving and holds the reader’s interest from cover to cover.” – David Wright, Past Commander Dearing-Beauregard Camp 1813, SCV

[James’] work stands out among the best of the historical novelists, and is a worthy addition to the Civil War fiction line-up. Huzzah! – Scott Mingus, Civil War Blogger

Jessica James is a former journalist and newspaper editor who resides in Gettysburg, Pa.

From CWBN:
We missed the release of this book when it originally appeared on January 19.