Battle: The Nature and Consequences of Civil War 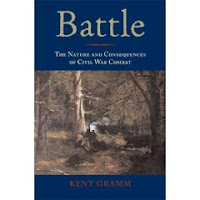 From the publisher:
Romanticism is as rife in Civil War history as any other and may produce more than its share of drums and trumpets writing that glosses over the fear, pain, and death that are inevitable components of all warfare. The essays that make up this collection seek to act as corrective to such celebratory history by carefully examining some of the unpleasant realities that marked combat in the Civil War—when industrial and technological warfare came of age, at a time when medical care, sanitation, diet, and other modern adaptations to industry were still in their infancy.

In addition to an introduction, an afterword, and an essay on the "Numbers" by editor Gramm, Paul Fussell contributes a powerful essay on "The Culture of War"; D. Scott Hartwig examines the face of battle at Gettysburg; Bruce A. Evans discusses "Wounds, Death, and Medical Care in the Civil War"; Eric T. Dean rethinks the meaning and consequences of combat in "The Awful Shock and Rage of Battle"; and Alan T. Nolan looks at the national consequences of battle and the resultant myth of the Lost Cause.

Kent Gramm is Professor of English at Wheaton College, Illinois, and author of November: Lincoln's Elegy at Gettysburg and Somebody's Darling: Essays on the Civil War.