Crisis Of Command In The Army Of The Potomac: Sheridan's Search for an Effective General 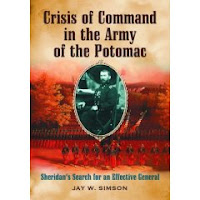 From the publisher:
With the ascendancy of Ulysses S. Grant in late 1863, the command tone of the United States Army underwent a dramatic change. While Grant's predecessor George McClellan had been overly cautious and reluctant to commit his full range of troops and resources to fight the South, Grant was committed to the philosophy that a war fought for total ends required total means.

Phillip Sheridan set about reorganizing the command to reflect Grant's new style. During the last six months of the war, he relieved three generals of their commands due to their inability to follow his orders precisely. William Averell, Alfred Torbert and Gouverneur Warren found themselves and their careers casualties of Sheridan's intense determination to bring an end to hostilities.

This work shows that only Ranald S. Mackenzie managed to survive Sheridan's search, proving himself the ideal subordinate in Sheridan's estimation.

Journalist Jay W. Simson is a member of the Western Ohio Civil War Roundtable, and has previously written on naval strategies of the Civil War. He lives in Van Wert, Ohio.