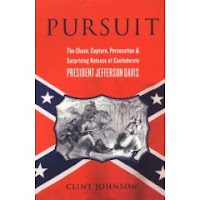 From the publisher:
While much has been written about the hunt for John Wilkes Booth, much less has been written about the efforts to apprehend Confederate President Jefferson Davis in the days following the dissolution of the Confederacy, and the subsequent attempt to try him for treason. In the only book to tell the definitive story of Davis's chase, capture, imprisonment, and release, journalist and Civil War writer Clint Johnson brings this chapter in our nation's history to vivid life, and paints a fascinating portrait of one of American history's most complex and enduring figures.

In the vulnerable weeks following the end of the War and Abraham Lincoln's assassination, some in President Andrew Johnson's administration burned to exact revenge against Davis. Trumping up charges of conspiracy to murder Lincoln and treason against the Union, Secretary of War Edwin Stanton ordered cavalry after Davis. After a chase through North and South Carolina and Georgia, Davis was captured on May 10, 1865. The former United States Senator and Mexican War hero was imprisoned for two years in Fortress Monroe, Virginia, where he was subjected to torture and humiliation-but never brought to trial. Remarkably, the Johnson administration knew Davis was innocent of all crimes before he was even arrested.

With a keen eye for the period's detail, as well as a Southerner's insight, Johnson sheds new light on Davis's time on the run, his treatment while imprisoned, his surprising release from custody, and his eventual exoneration-exposing the powerful political forces involved, and their lasting impact. Johnson draws on extensive official historical documents as well as countless archived private materials such asdiaries, letters, and private papers. With the 200th anniversary of Davis's birth in 2008, the time has never been better for a compelling account of such a defining episode of the Civil War.

Fascinated by the American Civil War since the fourth grade, Clint Johnson has written eight books on the subject, including the acclaimed Civil War Blunders. Originally from Florida, he counts Confederate soldiers from Florida, Georgia, and Alabama among his ancestors. He is active as a Civil War re-enactor and has portrayed soldiers from both the South and the Union. In researching Pursuit, he spent months studying letters, diaries, and the Official Records of the War of the Rebellion. A graduate of the University of Florida with a degree in journalism, he lives in the mountains of North Carolina with his wife, Barbara.