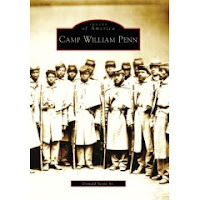 From the publisher:
Camp William Penn, established in 1863, was the largest federal facility to train black Northern-based soldiers during the Civil War and is steeped in Civil War history. Almost 11,000 troops and officers trained at the sprawling facility outside of Philadelphia and a special officers’ training school in the city.

The camp, backed by the Union League of Philadelphia, was located near the home of antislavery abolitionist Lucretia Mott. The area, today known as Cheltenham Township’s LaMott, was also instrumental in the Underground Railroad, with such great abolitionists as Harriet Tubman and Frederick Douglass addressing the troops. The soldiers were a part of Abraham Lincoln’s Bureau of United States Colored Troops, and several earned the Congressional Medal of Honor for heroics during battle. The vintage photographs in Camp William Penn were obtained from government agencies, universities, historical organizations, and the personal collections of soldiers’ descendants.

Donald Scott Sr. is an assistant professor of English at the Community College of Philadelphia and history columnist for the Journal Register Company. He has written about Camp William Penn as a contributor to America’s Civil War magazine and other publications.