Did Lincoln And The Republican Party Create The Civil War? An Argument 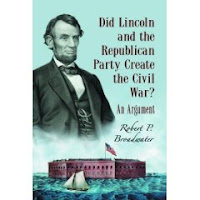 From the publisher:
The author seeks to challenge the long-held perceptions of the politics of the American Civil War. He presents the argument that the Civil War was fought, not to preserve the Union or free the slaves, but rather to establish the political power of the Republican Party within the federal government. The author argues further that Abraham Lincoln and the Republican Party manipulated events to bring about the Civil War in the first place and used the war as a pretext for the establishment of the modern central government.

Robert P. Broadwater has written more than 20 books and more than 100 magazine articles dealing with the Civil War and the Revolution. He is the author of many works on military history including Civil War Medal of Honor Recipients (2007), American Generals of the Revolutionary War (2007), The Battle of Olustee, 1864 (2006), The Battle of Perryville, 1862 (2005) and Chickamauga, Andersonville, Fort Sumter and Guard Duty at Home (2005) and lives in Bellwood, Pennsylvania.