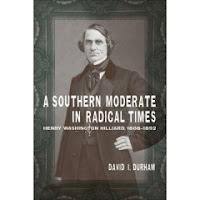 by David I. Durham

From the publisher:
In A Southern Moderate in Radical Times, David I. Durham offers a comprehensive and critical appraisal of one of the South's famous dissenters. Against the backdrop of one of the most turbulent periods in American history, he explores the ideological and political journey of Henry Washington Hilliard (1808-1892), a southern politician whose opposition to secession placed him at odds with many of his peers in the South's elite class. Durham weaves threads of American legal, social, and diplomatic history to tell the story of this fascinating man who, living during a time of unrestrained destruction as well as seemingly endless possibilities, consistently focused on the positive elements in society even as forces beyond his control shaped his destiny.

A three-term congressman from Alabama, as well as a professor, attorney, diplomat, minister, soldier, and author, Hilliard had a career that spanned more than six decades and involved work on three continents. He modeled himself on the ideal of the erudite statesman and celebrated orator, and strove to maintain that persona throughout his life. As a member of Congress, he strongly opposed secession from the Union. No radical abolitionist, Hilliard supported the constitutional legality of slavery, but working in the tradition of the great moderates, he affirmed the status quo and warned of the dangers of change. For a period of time he and like-minded colleagues were able to successfully overcome the more radical voices and block disunion, but their success was short-lived and eventually overwhelmed by the growing appeal of sectional extremism. As Durham shows, Hilliard's personal suffering, tempered by his consistent faith in Divine Providence, eventually allowed him to return to his ideological roots and find a lasting sense of accomplishment late in life by becoming the unlikely spokesman for the Brazilian antislavery cause.

From Hilliard's literary addresses at South Carolina College and the University of Alabama to his letters and speeches during his tenure in Brazil, Durham reveals an intellectual struggling to understand his world and to reconcile the sphere of the intellectual with that of the church and political interests. A Southern Moderate in Radical Times opens a window into Hilliard's world, and reveals the tragedy of a visionary who understood the dangers lurking in the conflicts he could not control.

From CWBN:
The exact day of release for this June title is unknown.