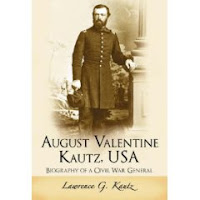 From the publisher:
Born in Germany in 1828, future Union general August Valentine Kautz came to America as an infant. He was privileged to obtain schooling and, after service in the war with Mexico, attended West Point.

Relying heavily on detailed journals kept by Kautz for 43 years, this biography covers his early experiences and his time in the turbulent Pacific Northwest, where he was involved in Indian affairs and the Rogue River War. As with so many American military men of the time, however, the defining event in his career was the Civil War.

Originally assigned to the Western Theater, where he played a role in the capture of Morgan’s Raiders, Kautz’s service included participation in the First Battle of Deep Bottom, the Wilson-Kautz Raid, and the Petersburg assault aimed at capturing Richmond. Kautz has often been misrepresented in historical mentions and this biography seeks to set the record straight. Period photographs and a number of maps are included.