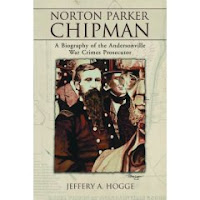 by Jeffery A. Hogge

From the publisher:
Norton Parker Chipman is best known for successfully prosecuting Henry Wirz, the infamous commander of the Confederacy's Andersonville Prison where more than 13,000 Union soldiers died during the American Civil War. Beyond his involvement in Wirz's trial, Chipman had an almost Forrest Gump-like tendency to naturally appear anywhere important events occurred. He accompanied Abraham Lincoln to Gettysburg and served in the War Department. Later, he represented the District of Columbia as its delegate to Congress and led the fund-raising effort to complete the Washington Monument. After moving to California, he rose to prominence in the state's burgeoning agribusiness and served many years as a Supreme Court commissioner and a Court of Appeal presiding justice. Covering these details and much more, this biography provides intimate glimpses of a Union officer's perspective of the Civil War, a Washington insider's view of the postwar capital and a veteran's influence in shaping and developing California.

Jeffery A. Hogge is a judicial attorney with the California Court of Appeal, Third Appellate District, the court on which Norton Parker Chipman served as presiding justice for the court's first 16 years. He has been a contributing author to legal practice guides and magazines.