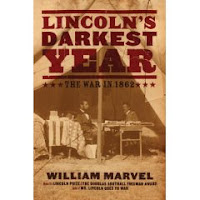 From the publisher:
A revealing look at Lincoln's actions in 1862—and a nation in the midst of war

Lincoln's Darkest Year offers a gripping narrative of 1862, a pivotal year in our country's Civil War. Marvel continues the story he began in Mr. Lincoln Goes to War, which focused on Lincoln's first year in office, again relying on recently unearthed primary sources and little-known accounts to paint a picture of this critical year in newfound detail. Lincoln's Darkest Year highlights not just the actions but also the deeper motivations of the major figures, including General Ulysses S. Grant, Jefferson Davis, George McClellan, Stonewall Jackson, and, most notably, Lincoln himself. As the action darts from the White House to the battlefields and back, Marvel sheds new light on the hardships endured by everyday citizens and the substantial and sustained public opposition to the war.

The second in a planned four-part series on the Civil War, and the first major reexamination in over fifty years, Lincoln's Darkest Year stands apart from traditional assumptions and narratives about the early years of the Civil War. Marvel combines fluid prose and scholarship with the skills of an investigative historical detective to unearth the true story of our nation's greatest crisis.

William Marvel is the author of "'Mr. Lincoln Goes to War"', "'Lee's Last Retreat"', "'Andersonville"', and several other acclaimed books on the Civil War. He has won a Lincoln Prize, the Douglas Southall Freeman Award, and the Bell Award.