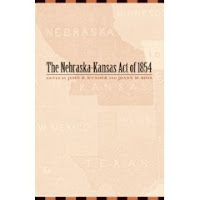 From the publisher:
The Nebraska-Kansas Act of 1854 turns upside down the traditional way of thinking about one of the most important laws ever passed in American history. The act that created Nebraska and Kansas also, in effect, abolished the Missouri Compromise, which had prohibited slavery in the region since 1820. This bow to local control outraged the nation and led to vicious confrontations, including Kansas’s subsequent mini-civil war. The essays in this volume shift the focus from the violent and influential reaction of “Bleeding Kansas” to the role that Nebraska played in this decisive moment.

Essays from both established and new scholars examine the historical context and significance of this statute. They treat American political culture of the 1850s; American territorial history; the roles of Abraham Lincoln, Stephen Douglas, and Frederick Douglass in the creation and implementation of the law; the reactions of African Americans to the act; and the comparative impact on Nebraskans and Kansans. At the 150th anniversary of the Kansas-Nebraska Act, as it came to be known, these scholars reexamine the political, social, and personal contexts of this act and its effect on the course of American history.

John R. Wunder is a professor of history and journalism at the University of Nebraska–Lincoln. He is the author of numerous books, including “Retained by the People”: A History of American Indians and the Bill of Rights, and the coauthor of Americans View Their Dust Bowl Experience.