Grant's Lieutenants: From Chattanooga to Appomattox 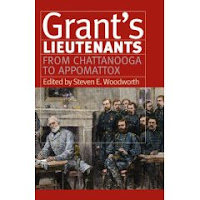 From the publisher:
A companion to Grant's Lieutenants: From Cairo to Vicksburg, this new volume assesses Union generalship during the final two years of the Civil War. Steven Woodworth, one of the war's premier historians, is joined by a team of distinguished scholars--Mark Grimsley, John Marszalek, and Earl Hess, among others--who critique Ulysses S. Grant's commanders in terms of both their working relationship with their general-in-chief and their actual performances.

The book covers well-known Union field generals like William T. Sherman, George Thomas, George Meade, and Philip Sheridan, as well as the less-prominent Franz Sigel, Horatio Wright, Edward Ord, and Benjamin Butler. In addition, it includes an iconoclastic look at Grant's former superior and wartime chief of staff Henry W. Halleck, focusing on his wise counsel concerning Washington politics, the qualities of various subordinates, and the strategic environment. Each of these probing essays emphasizes the character and accomplishments of a particular general and shows how his relationship with Grant either helped or hindered the Union cause.

The contributors highlight the ways Grant's lieutenants contributed to or challenged their commander's own success and development as a general. In addition to revisiting Grant's key collaboration with Sherman, the essays illuminate the hostile relationship between Grant and Thomas, commander of the Army of the Cumberland; Grant's almost daily contact with "Old Snapping Turtle" Meade, whose expertise relieved Grant of the close tactical direction of the Army of the Potomac; and the development of a highly successful command partnership between Grant and Sheridan, his new commander of the Army of the Shenandoah. Readers will also learn how Grant handled the relative incompetence of his less sterling leaders--perhaps failing to give Butler adequate direction and overlooking Ord's suspect political views in light of their long relationship.

Like its companion volume, Grant's Lieutenants: From Chattanooga to Appomattox is an essential touchstone for Civil War scholars and aficionados. It offers new and profound insights into the command relationships that fundamentally shaped both the conduct of the war and its final outcome.

This book is part of the Modern War Studies series.

"These stimulating and insightful essays remind us of the collaborative nature of military command and help us appreciate how Grant persevered and ultimately prevailed in directing the Union armies to victory." -- Brooks D. Simpson, author of Ulysses S. Grant: Triumph over Adversity, 1822-1865

"A companion to Woodworth's earlier collection of essays on top Union commanders that matches the high quality of the original. . . . Offers incisive analysis of the men Grant entrusted with execution of his strategic plans. Scholars and general readers will find much to ponder in this fine book." -- Gary W. Gallagher, author of The Confederate War

"A fascinating and thought-provoking book." -- Stephen D. Engle, author of Struggle for the Heartland: The Campaigns from Fort Henry to Corinth