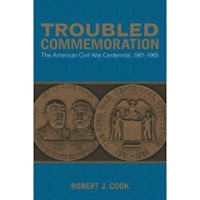 From the publisher:
In 1957, Congress voted to set up the United States Civil War Centennial Commission. A federally funded agency within the Department of the Interior, the commission's charge was to oversee preparations to commemorate the one hundredth anniversary of the central event in the Republic's history.

Politicians hoped that a formal program of activities to mark the centennial of the Civil War would both bolster American patriotism at the height of the cold war and increase tourism in the South. Almost overnight, however, the patriotic pageant that organizers envisioned was transformed into a struggle over the Civil War's historical memory and the injustices of Jim Crow. In Troubled Commemoration, Robert J. Cook recounts the planning, organization, and ultimate failure of this controversial event and reveals how the broadbased public history extravaganza was derailed by its appearance during the decisive phase of the civil rights movement.

Cook shows how the centennial provoked widespread alarm among many African Americans, white liberals, and cold warriors because the national commission failed to prevent southern whites from commemorating the Civil War in a racially exclusive fashion. The public outcry followed embarrassing attempts to mark secession, the attack on Fort Sumter, and the South's victory at First Manassas, and prompted backlash against the celebration, causing the emotional scars left by the war to resurface. Cook convincingly demonstrates that both segregationists and their opponents used the controversy that surrounded the commemoration to their own advantage. Southern whites initially embraced the centennial as a weapon in their fight to save racial segregation, while African Americans and liberal whites tried to transform the event into a celebration of black emancipation.

Forced to quickly reorganize the commission, the Kennedy administration replaced the conservative leadership team with historians, including Allan Nevins and a young James I. Robertson, Jr., who labored to rescue the centennial by promoting a more soberly considered view of the nation’s past. Though the commemoration survived, Cook illustrates that white southerners quickly lost interest in the event as it began to coincide with the years of Confederate defeat, and the original vision of celebrating America's triumph over division and strife was lost.

The first comprehensive analysis of the U.S. Civil War Centennial, Troubled Commemoration masterfully depicts the episode as an essential window into the political, social, and cultural conflicts of America in the 1960s and confirms that it has much to tell us about the development of the modern South.

Robert J. Cook is the author of several books, including Sweet Land of Liberty? The African American Struggle for Civil Rights in the Twentieth Century and Civil War America: Making of a Nation, 1848–1877. He is Professor of American History at the University of Sheffield in England.

From CWBN:
We assigned a release date of June 6 to this undated June release.