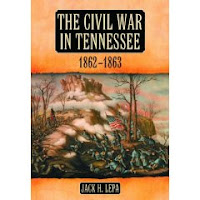 From the publisher:
In 1862, with the outcome of the Civil War far from certain, Union and Confederate leaders began to pinpoint locations vital for their army’s success. Tennessee was one such possession. Although nominally under Confederate control, with Union loyalists in the east, Confederate supporters in the west and a mixture in the central region, the state did not have ironclad loyalty to either cause. For the Union, gaining control of Tennessee meant crippling the transportation options of the Confederacy, giving Union forces access to the rivers and mountain passes which would potentially lead them to the heart of the Confederacy and victory over the South. For the Confederacy, maintaining control of Tennessee was vital not only to protect its southernmost states but also to retain control of the state’s agricultural products and mineral wealth, neither of which it could afford to lose.

Drawing on contemporary sources such as memoirs and official correspondence, this volume details the struggle for control of Tennessee during 1862 and 1863. Beginning with the Union commanders’ initial reluctance to challenge the Confederate army, it describes the fortuitous momentum Ulysses S. Grant’s arrival added to the Federal struggle in the west and, consequently, the Union quest for Tennessee. It follows the movements of Union and Confederate forces through some of the worst battles of the war, including Shiloh, Stones River and Chickamauga. Finally, the Union victory at the battle of Chattanooga—which brought Tennessee definitively under Union control—and its consequences for both sides are discussed in detail.

Jack H. Lepa is also the author of Breaking the Confederacy (2005) and The Shenandoah Valley Campaign in 1864 (2003). His articles have been published in Biblio and Renaissance magazines. He lives in Las Vegas.

From CWBN:
We have assigned June 18 as release date for this undated June release.