Maryland Voices of the Civil War 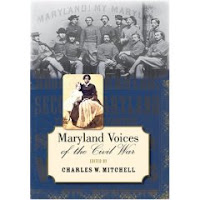 From the publisher:
The most contentious event in our nation's history, the Civil War deeply divided families, friends, and communities. Both sides fought to define the conflict on their own terms -- Lincoln and his supporters struggled to preserve the Union and end slavery, while the Confederacy waged a battle for the primacy of local liberty or "states' rights." But the war had its own peculiar effects on the four border slave states that remained loyal to the Union. Internal disputes and shifting allegiances injected uncertainty, apprehension, and violence into the everyday lives of their citizens.

No state better exemplified the vital role of a border state than Maryland -- where the passage of time has not dampened debates over issues such as the alleged right of secession and executive power versus civil liberties in wartime. In Maryland Voices of the Civil War, Charles W. Mitchell draws upon hundreds of letters, diaries, and period newspapers -- many previously unpublished -- to portray the passions of a wide variety of people -- merchants, slaves, soldiers, politicians, freedmen, women, clergy, slave owners, civic leaders, and children -- caught in the emotional vise of war. Mitchell tells the compelling story of how Maryland African Americans escaped from slavery and fought for the Union and their freedom alongside white soldiers and he reinforces the provocative notion that Maryland's Southern sympathies -- while genuine -- never seriously threatened to bring about a Confederate Maryland.

Charles W. Mitchell, a Marylander by birth and by choice, is a writer descended from a congressman, a pirate, and two Confederate officers who appear in the pages of this book. The ancestors of his wife, Betsy, include eleven Union soldiers, Pennsylvanians all. Charley and Betsy, and their two children, Abbie and Alec, live in Lutherville, Maryland.

From CWBN:
A book of this sort depends mainly on three elements: sources, "flavoring," and editing.

Editor Charles Mitchell should be given the highest credit for his selection of sources, a rich array of previously unquoted material set in contexts that can, with reasonable ease, be looked up by researchers or just savored by readers as "flavor."

"Flavor" is a matter of taste and trust, of course: is the author leading us with his source selections? Is there an agenda at work? In any case, there is a lot of flavor here, over 400 pages worth, and the endnotes alone span 50 pages.

The editing is good. The broad topical organization is interesting: "Indecision," "Occupation," and (black) "Liberation." The weaving of sources is also good but structurally challnging because of the number of "voices." A long sit with the book will convey a certain "jumpiness" despite the editor's best efforts.

This is undoubtedly a labor of love and Johns Hopkins is backing it with a sturdy binding that will support many readings and look-ups.

Admin note from CWBN:
This blog entry has been updated with comments (above) and redated as June 30 based on information received from the publisher. The publisher's own release date may therefore not match the release dates shown by Amazon or B&N.