Of Love and War: The Civil War Letters and Medicinal Book of Augustus V. Ball 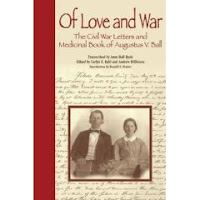 From the publisher:
Of Love and War: The Civil War Letters and Medicinal Book of Augustus V. Ball is not a typical Civil War letter collection.

Ball's circumstances and experiences allowed him to glimpse the war through two sets of eyes, that of a loving husband, and of an increasingly disillusioned physician. The inclusion of Ball's medicinal recipe book is the first of its kind to appear in print completely annotated. Readers will find themselves not only sympathetic to the struggles of one newlywed couple, but educated about the medical and herbal lore of that era.

During the war, Ball and his wife, Argent, managed to stay in contact, not only with each other, but with their various friends and family throughout the South. Ball's letters home give an account of one man's experiences in the Trans-Mississippi Theater of the Civil War with the Twenty-third Texas Cavalry, and later with McMahan's Light Artillery Battery. The mail he and his wife received from others gives a cross-section of the Southern experience in general.

ANNE BALL RYALS of Montgomery, Alabama, transcribed the letters with great regard for the principals, Augustus and Argent, her great-grandparents. CARLYN E. KAHL is the Managing Editor of State House Press/McWhiney Foundation Press in Abilene, Texas. ANDREW HILLHOUSE is a graduate student in Molecular Microbiology and Immunology at the University of Missouri in Columbia, Missouri.