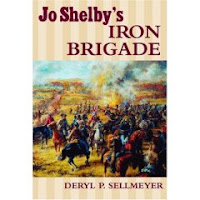 From the publisher:
Gen. Joseph Orville Shelby’s involvement in the Civil War began when he raised a cavalry company for Southern service after refusing a commission in the Federal army. Shelby’s company of Rangers became known as the most disciplined company in the pro-Confederate Missouri State Guard.

General Shelby’s reputation as a fierce commander on the battlefield coexisted with his reputation for acts of compassion toward prisoners of war and innocent civilians. His actions were actuated by his principles, and he permitted no dishonorable act. He was relentless in the punishment of crimes against the weak and helpless, showing regard for all civilians. One example illustrating this occurred prior to the war, when he single-handedly faced down a lynch mob in Lexington, Missouri, to rescue a man who had insisted on his right to vote for Abraham Lincoln at the polls. Shelby’s actions set a high standard of courage and honor for his men. While he was not sentimental over fallen comrades, he did not subject his men to dangers that he did not face himself. As a result, the men of Shelby’s Brigade idolized him and followed him without question.

Every march, camp, and battle that could be identified from reliable source material is incorporated here in this thoroughly researched book. Information was obtained from officers’ reports and correspondence from both armies, the National Archives and Records Service, newspapers from that period, articles written by veterans after the war, and the memoirs of Confederate brigadier general M. Jeff Thompson, who temporarily commanded Shelby’s Brigade near the end of the war.

Jo Shelby was motivated by his unselfish belief in the rightness of the cause of Southern independence. He was a true Southern patriot and his accomplishments place him among the top Confederate cavalry generals. After the war he was beloved by the men who had fought for him and even, over time, by his past adversaries. His life is worthy of study and reflection, for his actions embody the best qualities of the American soldier.

While reading Battles and Leaders of the Civil War in 1977, Deryl Sellmeyer stumbled across mention of a cavalry fight at Prairie D’Ane, Arkansas. He recalled the name as a battle mentioned in a brief biography his late grandmother had given him of her grandfather’s life. He realized that her grandfather, a soldier in Shelby’s Brigade, had fought at Prairie D’Ane, and he was hooked. He began researching voraciously, and his interest never waned. In 1983, he self-published his first book, Saline County Soldier, a brief biography of his great-great-grandfather’s service in the Civil War. After retiring in 2003, Mr. Sellmeyer completely devoted his time to completing his manuscript of the history of Shelby’s Brigade.