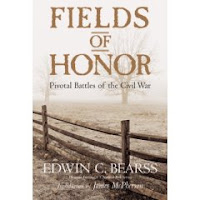 From the publisher:
Edwin C. Bearss presents legendary Civil War battles as they have never before been told, rich with human interest and little-known facts.
In Fields of Honor, Bearss, hailed as the "Homer of the Civil War," shares his encyclopedic knowledge in print for the first time, providing his legions of fans with a tangible collection of his expertise. Culled from recordings of his widely popular battlefield tours, Bearss recounts twenty of the war's most significant battles in lively, detailed prose. Illustrated with exhaustive battlefield maps and fascinating historical images - and published in conjunction with the 140th anniversary of the end of the Civil War - this volume will stand as an important reference for generations to come.

An easily accessible, episodic narrative, Fields of Honor will appeal to Civil War buffs and general interest readers alike. From the first shots at Fort Sumter to the surrender at Appomattox, this engaging collection takes readers through the Civil War in the unique voice that has made Edwin Bearss a living legend.