Quantrill in Texas: The Forgotten Campaign 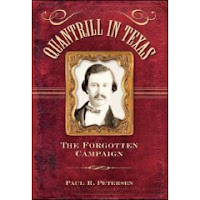 From the publisher:
The second of a three-volume work that examines the life of one of the most controversial figures of the Civil War, Quantrill in Texas: The Forgotten Campaign documents a part of William C. Quantrill's life and career that has largely been ignored by historians. Indeed, Quantrill's most unrecognized accomplishments outside his adopted state of Missouri occurred in Texas, not in Kansas or Kentucky.
Quantrill in Texas corrects that oversight, carefully exploring for the first time the places and people associated with the guerrilla leader as he moved south during the winter to a safer environment in Texas. The result is a surprising addition to the Quantrill legacy.

His first experience in Texas and his subsequent trips to and from the state reveal that he became acquainted with the noted personalities who lived there. His battles and skirmishes along the way increased his reputation among the citizenry as word spread of his victories throughout the South.

The arrival of Quantrill and his men was welcomed by those who lived in north Texas. While most historians depict him as resting in exile, he occupied himself with battling cattle thieves, warding off Indian attacks, hunting down deserters and draft dodgers, and even quelling riots on behalf of the Confederate cause. Careful research in the official records, local historical records, and archaeological excavations reveals that Quantrill and his men thwarted two known Federal invasions of Texas.

Paul R. Petersen is a highly decorated retired officer of the U.S. Marine Corps and a lifelong resident of Jackson County, Missouri, near where William Quantrill lived. The author of Quantrill of Missouri: The Making of a Guerrilla Warrior, he lives in Raytown, Missouri.