Northborough in the Civil War: Citizen Soldiering and Sacrifice 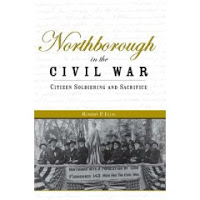 Northborough sent over half of its eligible population into this war. This book attempts to bring to life as many of these people as possible.

The people of Northborough, Massachusetts played an important role in the Civil War. The war began in response to an armed internal rebellion the result of two opposed social systems. At the heart was a dispute over slavery that had been steadily and intensively scrutinized for thirty years particularly in New England. In 1848 in Worcester County, Massachusetts, the Free Soil candidate for the presidency polled more votes than either candidate of the two major parties, Whig and Democrat.

In Northborough, former president Martin Van Buren, the Free Soil nominee, received nearly three times as many votes as the winner, Zachary Taylor. These figures do not prove Northborough was a hotbed of abolitionists, but they do suggest that its vigorous anti-slavery activity demands preliminary attention. The South suspected the later Republican opposition to the extension of slavery as merely a first step against an institution established by the Constitution. Were towns like Northborough welcoming of abolitionists silent advocates for an emancipation that had to be proclaimed mid-war?