This Terrible War: The Civil War and Its Aftermath 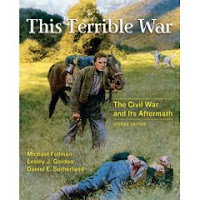 From the publisher:
This absorbing text examines the American Civil War and its aftermath, exploring the crucial themes, and challenging many traditional views about the war that nearly tore this nation in two.

Attention is paid to the social aspects of the war and includes a presentation of what was happening on the home front while the war was going on. While This Terrible War maintains a clear chronological foundation, it is also concerned with developing the central themes that are necessary for a rich and full understanding of the war and its aftermath.

With a clear chronological foundation, This Terrible War addresses the attitudes of pre-war American, the slavery debate, differences between the North and South, the economic and social climate of the country, the role of African Americans during the war, and the war itself with stories of both common soldiers and powerful military figures. The authors devote significant attention to the social and cultural aspects of the war to impart a rich and full understanding of this terrible war and its aftermath. Civil War, African Americans, Confederate States of America, Jefferson Davis, Ulysses Grant, Robert E. Lee, the Union. Civil War and Reconstruction courses.

Whether a novice or an expert on the Civil War, readers will find This Terrible War to be a well-designed and fully developed book, and a powerful tool in learning about the Civil War and its foreground and aftermath. The book provides an analysis of the United States in the time leading up to the war—the slavery debate, the differences between North and South, the economic and social climate of the country—and moves into the war itself, presenting stories of both common soldiers and powerful military figures. The authors also trace the impact and eventual abolition of slavery, examining the role of African-Americans during the war. They conclude that the victory of the North resulted from superior resources and manpower, but also examine other contributing factors—providing a well-rounded, interesting and thorough analysis. The final section of the book describes the aftermath of the war, and the Epilogue examines how Americans have remembered the Civil War in later years. Ideal for anyone interested in the United States Civil War or US military history in general.