Portraits of Conflict: A Photographic History of Tennessee in the Civil War 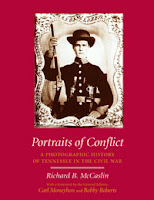 by Richard B. McCaslin

From the publisher:
It’s one thing to understand that over twenty-thousand Confederate and Union soldiers died at the Battle of Murfreesboro. It’s quite another to study an ambrotype portrait of twenty-year-old private Frank B. Crosthwait, dressed in his Sunday best, looking somberly at the camera. In a tragically short time, he’ll be found on the battlefield, mortally wounded, still clutching the knotted pieces of handkerchief he used in a hopeless attempt to stop the bleeding from his injuries.

Private Crosthwait’s image is one of more than 250 portraits—many never before published—to be found in the much anticipated Portraits of Conflict: A Photographic History of Tennessee in the Civil War. The eighth in the distinguished Portraits of Conflict series, this volume joins the personal and the public to provide a uniquely rich portrayal of Tennesseans—in uniforms both blue and gray—who fought and lost their lives in the Civil War.

Here is the story of a widow working as a Union spy to support herself and her children. Of a father emerging from his house to find his Confederate soldier son dying at his feet. Of a nine-year-old boy who attached himself to a Union regiment after his mother died. Their stories and faces, joined with personal remembrances from recovered letters and diaries and ample historical information on secession, famous battles, surrender, and Reconstruction, make this new Portraits of Conflict a Civil War treasure.

Richard B. McCaslin is an associate professor of history at the University of North Texas. He is the author of Lee in the Shadow of Washington; Tainted Breeze: The Great Hanging at Gainesville, Texas; and two volumes in the Portraits of Conflict series. He is the winner of the Jefferson Davis Historical Gold Medal, United Daughters of the Confederacy, and a fellow in the Texas State Historical Association.