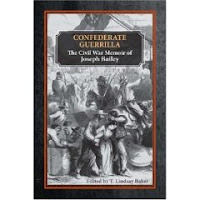 From the publisher:
Joseph M. Bailey's memoir, Confederate Guerilla, provides a unique perspective on the fighting that took place behind Union lines in Federal-occupied northwest Arkansas during and after the Civil War. This story -- now published for the first time -- will appeal to modern readers interested in the grassroots history of the Trans-Mississippi war. Bailey participated in Port Hudson, eventually escaping to northwest Arkansas where he fought as a guerrilla against Federal troops and civilian unionists. After Federal forces gained control of the area, Bailey rejoined the Confederate army and continued in regular service in northeast Texas until the end of the war.

Historians will find the descriptions of military campaigns and the observations on guerrilla war especially valuable. According to Bailey, Southern guerrillas were motivated less by a sense of loyalty to either the Confederate or Union side than by a determination to protect their families and neighbors from the "Mountain Federals." This partisan war waged between the rebel guerrillas and Southern Unionists was essentually a "struggle for supremecy and revenge."

Comprehensive annotations are provided by editor T. Lindsay Baker to illuminate the clarity and reliability of Bailey's late-life memoir.