Singing for Freedom: The Hutchinson Family Singers and the Nineteenth-Century Culture of Reform 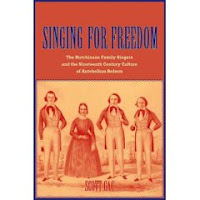 From the publisher:
In the two decades prior to the Civil War, the Hutchinson Family Singers of New Hampshire became America’s most popular musical act. Out of a Baptist revival upbringing, John, Asa, Judson, and Abby Hutchinson transformed themselves in the 1840s into national icons, taking up the reform issues of their age and singing out especially for temperance and antislavery reform. This engaging book is the first to tell the full story of the Hutchinsons, how they contributed to the transformation of American culture, and how they originated the marketable American protest song.

Through concerts, writings, sheet music publications, and books of lyrics, the Hutchinson Family Singers established a new space for civic action, a place at the intersection of culture, reform, religion, and politics. The book documents the Hutchinsons’ impact on abolition and other reform projects and offers an original conception of the rising importance of popular culture in antebellum America.

Scott Gac is visiting professor of American studies at Trinity College in Hartford, Connecticut, and an accomplished double bass player.