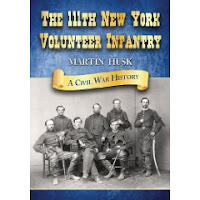 From the publisher:
This regimental history follows the 111th New York Volunteer Infantry's service from muster through victory, with many first-hand accounts and primary sources. It provides details on the towns from which the regiment was organized and examines the men who served in its ranks. Battles in which the regiment fought, including Harper's Ferry, Gettysburg and Petersburg, are covered in detail, with close unit-level coverage as well as information on the overall strategy and the regiment's place in the greater conflict. An appendix covers in-depth the October 1864 capture of 83 111th soldiers by the Confederacy, following their imprisonment, ill-treatment, and eventual death or release.

Martin W. Husk is a project manager for the U.S. Environmental Protection Agency. He lives in Cary, North Carolina.