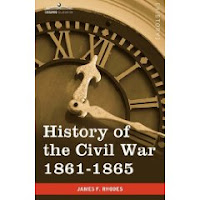 From the publisher:
This landmark study of the most traumatic era in American history won a Pulitzer Prize in 1918 for its concise, clear-minded survey of the Civil War from political and economic perspectives. From "the great factor in the destruction of slavery"-the election of Abraham Lincoln as President in 1860-to the "twenty thousand men in Wall Street" who sang to celebrate the war's end four years later, Rhodes, a self-taught historian, lends a distinctive voice to his retelling of the war. All students of the upheaval and disorder of the period will appreciate this enduring and unusual perspective on it.