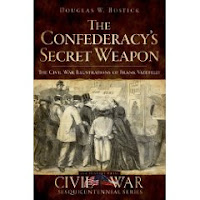 From the publisher:
Sent to the United States as a war correspondent for the Illustrated London News, Frank Vizetelly quickly found himself in hot water with the Federal secretary of war when his depictions of Bull Run hit the papers. He was forbidden access to the Union army, so he took up with the Confederates instead, covering the Civil War from Charleston to the Mississippi and north to Virginia, becoming a favorite among the soldiers and even, at times, acting as a spy.

His articles and sketches shaped the views of the English regarding the war, creating support for the Southern cause throughout Great Britain. Join Civil War historian Douglas W. Bostick as he relates the many engagements and battles covered by Vizetelly, including Charleston, Fredericksburg, Vicksburg, the March on Richmond and the early Mississippi campaigns, all accompanied by the artist's engravings and reported in his own lively words. Vizetelly's remarkable story has never been properly told until now.