The Battle of Port Royal 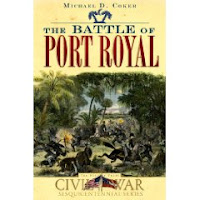 From the publisher:
November 1861. The South was winning the Civil War. Fort Sumter had fallen to the Confederates. The Federal army was routed at Manassas. The blockade of Southern ports was a farce; commerce and weapons flowed almost as freely as before the war. There were stirrings of interest from foreign powers in recognizing the Confederacy and brokering a forced peace accord. The Federals needed to turn the tide. The largest fleet ever assembled by the United States set its sights on the South Carolina coast for this much-needed victory.

On November 7, 1861, this mighty weapon of war engaged two undermanned and outgunned forts in Hilton Head in a clash called the Battle of Port Royal. Join historian Michael Coker as he tells the story of this largely forgotten battle, a pivotal turning point in the war that defined our nation.