"For We Shall Meet Again..." Letters and Diaries of the Civil War 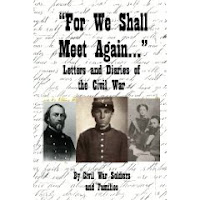 From the publisher:
This is a collection of correspondence and diary entries of the Civil War, written by soldiers, sweethearts, wives, brothers, and friends who may never have seen each other after they were written.

It is impossible to find a more reliable source of information on any historical period other than first-hand accounts. Countless hours can be spent hunched over tomes of data, strategic maps, theories, as well as lectures and essays on America's bloodiest conflict written by top contemporary historians, but in the end perhaps more can be learned from one letter written home from a 19 year old volunteer to his mother.

This diverse collection of letters and diary entries ranges from the upper echelon of field command and high society to the average undereducated field hand. We read the Confederate's famous own General T. J. "Stonewall" Jackson's letters to his friend Francis McFarland, as well as Private Newton Scott writing to his parents in Iowa. We get insights into everyday army life and camp conditions from the banal to the horrific. Most importantly we get pure emotion bled straight into the letters, often from soldiers directly after combat, recounting in great detail that which no human being should have to endure.

Diary entries which span the course of the war can show quite a change in heart and mind as the years drag by and hopes of a quick end to the war diminish month by month. Those surviving pieces of history we are lucky to still have, which are now housed in museums and private historical collections many times handed down through families. They give us a glimpse of the past, and an idea of the greater whole of an era stricken with grief and national tragedy. They take us as close as we can get to the reality of one of America's most fierce and tragic periods.