Mr. Lincoln's Forts: A Guide to the Civil War Defenses of Washington 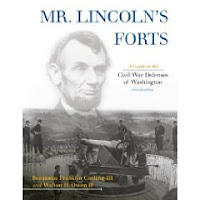 From the publisher:
At the start of the Civil War, federal troops constructed a ring of defensive fortifications around Washington, D.C. The forts saw limited military action, but many historians credit their deterring presence with saving the U.S. capital from a Confederate takeover. If the city wasn't impregnable, it was pretty close. This helpful book provides a full description of these forts--many of which have since been destroyed by farmers and suburban development. Several remain, however, such as Ft. Foote, Ft. Stevens, Ft. Ward, and Ft. Marcy (which became semi-famous in 1993 as the place where former White House deputy counsel Vincent Foster shot himself). Civil War buffs won't want to miss visiting these lesser-known but significant sites--and they won't want to miss this book, either.