The Battle of Okolona: Defending the Mississippi Prairie 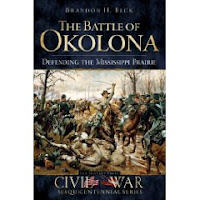 From the publisher:
In February 1864, General William Sooy Smith led a force of over seven thousand cavalry on a raid into the Mississippi Prairie, bringing fire and destruction to one of the very few breadbaskets remaining in the Confederacy. Smith's raid was part of General William T. Sherman's campaign to march across Mississippi from Vicksburg to destroy the railroad junction at Meridian. Both Smith and Sherman intended to burn everything in their path that could aid in the Southern war effort. It was a harbinger of things to come in Georgia, South Carolina and the Shenandoah Valley.

But neither reckoned with General Nathan Bedford Forrest. Forrest's small Confederate cavalry force defeated Smith in a running battle that stretched from West Point to Okolona and beyond. Forrest's victory prevented Smith from joining Sherman and saved the Prairie from total destruction.

Join Civil War historian Brandon Beck as he narrates this exciting story, with all the realities and color of cavalry warfare in the Deep South. Also included is a brief guided tour of the extant sites, preserved for future generations by the Friends of the Battle of Okolona, Inc.