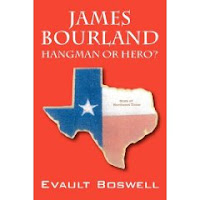 From the publisher:
Branded by historians as the "Hangman of Texas" because of his participation in the event known as the "Great Gainesville Hanging", James Bourland may have prevented northeast Texas from becoming a separate state, faithful to the Union. As Provost Marshall he uncovered a plot to overthrow the Confederate government by the "Peace Party" who planned to capture the arsenals at Sherman and Gainesville, Texas and with the aid of the Federal Army in Arkansas, invade Texas.

Forty men were hanged on the big elm in Gainesville and the rebellion was over. But Bourland also served his adopted state by fighting Indians who made raids on the citizens of northeast Texas. He also dealt with the "Brush Brigade" which consisted of men in Texas who were unhappy with the Confederate conscription act and hid out in the tangled thickets of northeast Texas to avoid fighting for either side.

He was accused of being harsh on his own men and allowing captured prisoners to be killed, but in the end, he was exonerated and given a Presidential pardon. He was called a good friend or a great hater. But was he a hangman or a hero?