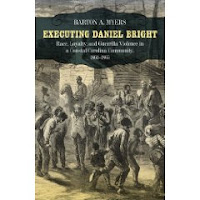 by Barton A. Myers

From the publisher:
On December 18, 1863, just north of Elizabeth City in rural northeastern North Carolina, a large group of white Union officers and black enlisted troops under the command of Brigadier General Edward Augustus Wild executed a local citizen for his involvement in an irregular resistance to Union army incursions along the coast.

Daniel Bright, by conflicting accounts either a Confederate soldier home on leave or a deserter and guerrilla fighter guilty of plundering farms and harassing local Unionists, was hanged inside an unfinished postal building. The initial fall was not mortal, and according to one Union soldier's account, Bright suffered a slow death by "strangulation, his heart not ceasing to beat for twenty minutes."

Until now, Civil War scholars considered Bright and the Union incursion that culminated in his gruesome death as only a historical footnote. In Executing Daniel Bright, Barton A. Myers uses these events as a window into the wider experience of local guerrilla conflict in North Carolina's Great Dismal Swamp region and as a representation of a larger pattern of retaliatory executions and murders meant to coerce appropriate political loyalty and military conduct on the Confederate homefront. Race, political loyalties, power, and guerrilla violence all shaped the life of Daniel Bright and the home he died defending, and Myers shows how the interplay of these four dynamics created a world where irregular military activity could thrive.

Myers opens with an analysis of antebellum slavery, race relations, slavery debates, and the role of the environment in shaping the antebellum economy of northeastern North Carolina. He then details the emergence of a rift between Unionist and Confederate factions in the area in 1861, the events in 1862 that led to the formation of local guerrilla bands, and General Wild's 1863 military operation in Pasquotank, Camden, and Currituck counties. He explores the local, state, regional, and Confederate Congress's responses to the events of the Wild raid and specifically to Daniel Bright's hanging, revealing the role of racism in shaping those responses. Finally, Myers outlines the outcome of efforts to negotiate neutrality and the state of local loyalties by mid-1864.

Revising North Carolina's popular Civil War mythology, Myers concludes that guerrilla violence such as Bright's execution occurred not only in the highlands or Piedmont region of the state's homefront; rather, local irregular wars stretched from one corner of the state to the other. He explains how violence reshaped this community and profoundly affected the ways loyalties shifted and manifested themselves during the war. Above all, Myers contends, Bright's execution provides a tangible illustration of the collapse of social order on the southern homefront that ultimately led to the downfall of the Confederacy.

Microhistory at its finest, Executing Daniel Bright adds a thought-provoking chapter to the ever-expanding history of how Americans have coped with guerrilla war.

Barton A. Myers is a postdoctoral fellow in military history at Cornell University in Ithaca, New York.