We Were the Ninth: A History of the Ninth Regiment, Ohio Volunteer Infantry April 17, 1861 to June 7, 1864: Civil War Sesquicentennial Edition 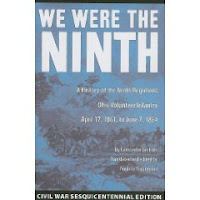 From the publisher:
We Were The Ninth is a translation, carefully edited and thoroughly annotated, of an important Civil War regiment. The Ninth Ohio - composed of Ohio Germans mostly from Cincinnati - saw action at Rich Mountain and Carnifex Ferry in West Virginia, Shiloh, Corinth, Perryville, Hoover's Gap, Nashville, Chattanooga, and Chickamauga. The Ninth began the War amid misgivings (Would a German speaking regiment in the Union Army cause chaos?) and ended its active service among the honored units. It continued as an active German-speaking veterans' organization.

Constantin Grebner published this significant history, in German, in 1897 and noted that it 'is intended as neither a history of the war nor a definitive account of battles. Rather, it is restricted to a straightforward, veracious report of what happened to The Ninth, and to recounting as accurately as possible The Ninth's experiences as a wartime regiment'. Frederic Trautmann's English translation is faithful to Grebner's original text, preserving its integrity while maintaining its energy, precision, and grace.