Until Antietam: The Life and Letters of Major General Israel B. Richardson, U.S. Army 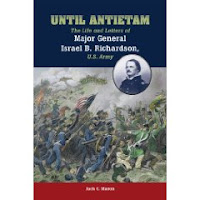 From the publisher:
This is an in-depth look at a daring and beloved Civil War leader.

While researching this book, author Jack C. Mason made the kind of discovery that historians dream of. He found more than one hundred unpublished, in fact unknown, letters from Union major general Israel B. Richardson to his family, written from his time as a West Point cadet until the day before his fatal wounding at the Battle of Antietam, the bloodiest day in American history. Using these freshly uncovered primary sources as well as extensive research in secondary materials, Mason has written the first-ever biography of Israel Bush Richardson.

Richardson's letters span more than twenty years of service in the U.S. Army. He served on the front lines of the Seminole War chasing Indians through the swamps of Florida; fought in every important battle of the Mexican-American War, during which he distinguished himself by capturing a Mexican artillery piece and turning it against the enemy at the Battle of Cerro Gordo; guarded dangerous outposts in southwest New Mexico; and raised a regiment at the start of the Civil War that would become the 2nd Michigan. During the Civil War, Richardson fought at the first Bull Run campaign, patrolled the area south of Washington, D.C., and led his division in the Peninsula Campaign. He rose quickly through the ranks of the Union Army over the first year of the war, as he was admired for his common sense, motivating leadership, and straightforward approach to combat. Mason traces Richardson's growth as a soldier, through his experiences and the guidance of his superiors, and then as a leader whose style reflected the actions of the former commanders he respected. Though he was a disciplinarian, Richardson took a relaxed attitude toward military rules, earning him the affection of his men. Unfortunately, his military career was cut short just as high-ranking officials began to recognize his aggressive leadership.

He was mortally wounded while leading his men at Antietam and died on November 4, 1862. "Until Antietam" brings to life a talented and fearless Civil War infantry leader. Richardson's story, placed within the context of nineteenth-century warfare, exemplifies how one soldier's life influenced his commanders, his men, and the army as a whole.

Jack C. Mason is a Department of Army civilian and a lieutenant colonel in the U.S. Army Reserve. He serves as an instructor for the Command and General Staff College and has published several articles in Army magazine.