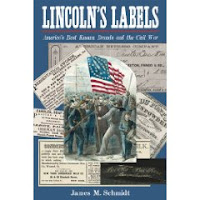 From the publisher:
From du Pont’s gunpowder and Borden’s condensed milk to Procter & Gamble’s soap and Brooks Brothers’ uniforms, this history investigates how today’s familiar brand names served a vital role for the Union during the Civil War. Rarely told stories from the companies who supplied soldiers and sailors with food, clothing, weapons, and medicine recount tales of political intrigue, family and friends torn apart, and paths crossed with Abraham Lincoln. Not only do these accounts mirror the war itself, they also show that life during conflict can often be as intriguing and dangerous for a company of employees as it is a company of soldiers.

"Lincoln's Labels tells how some businesses still operating contributed to, and were affected by, the Civil War. It does this quite well . . . But Lincoln's Labels is also about one of the many ways which we—Americans of the early 21st century—are linked inextricably to the great national epic . . . A good read for anyone, scholar, 'buff,' or ordinary citizen." —Al Nofi, author, A Civil War Treasury, from the foreword