Baring the Iron Hand: Discipline in the Union Army 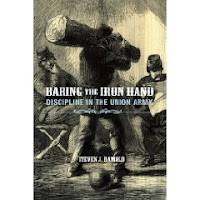 From the publisher:
This title provides an in-depth examination of internal conflict and discipline in the Union Army.

During antebellum wars the Regular army preserved the peace, suppressed the Indians, and bore the brunt of the fighting. The Civil War, however, brought an influx of volunteers that overwhelmed the number of army Regulars, forcing a clash between traditional military discipline and the expectations of citizens.

Baring the Iron Hand provides an extraordinarily in-depth examination of this internal conflict and the issue of discipline in the Union Army.

Ramold tells the story of the volunteers, who, unaccustomed to such military necessities as obeying officers, accepting punishment, and suppressing individuality, rebelled at the traditional disicpline expected by the standing army. Unwilling to fully surrender their perceived rights as American citizens, soldiers both openly and covertly defied the rules. They challenged the right of their officers to lead them and established their own policies on military offenses, proper conduct, and battlefield behavior. Citizen soldiers also denied the army the right to punish them for offenses like desertion, insubordination, and mutiny that had no counterpart in civilian life.

Ramold demonstrates that the clash between Regulars and volunteers caused a reinterpretation of the traditional expectations of discipline. The officers of the Regular army had to contend with independent-minded soldiers who resisted the spit-and-polish discipline that made the army so efficient but also alienated the volunteers' sense of individuality and manhood.

Unable to prosecute the vast number of soldiers who committed offenses, professional officers reached a form of populist accommodation with their volunteer soldiers. Unable to eradicate or prevent certain offenses, the army tried simply to manage them or to just ignore them. Instead of applying traditionally harsh punishments for specific crimes as they had done in the antebellum period, the army instead mollified its men by extending amnesty, modifying sentences, and granting liberal leniency to many soldiers who otherwise deserved the harshest of penalities.

Ramold's fascinating look into the lives of these misbehaving soldiers will interest both Civil War historians and enthusiasts.

STEVEN J. RAMOLD is Assistant Professor of History at Eastern Michigan University. He is the author of Slaves, Sailors, Citizens: African Americans in the Union Army.