The Civil War in Spotsylvania County (VA): Confederate Campfires at the Crossroads 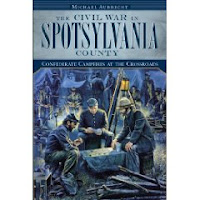 From the publisher:
From 1861 to 1865, hundreds of thousands of troops from both sides of the Civil War marched through, battled and camped in the woods and fields of Spotsylvania County, earning it the nickname 'Crossroads of the Civil War.' When not engaged with the enemy or drilling, a different kind of battle occupied soldiers boredom, hunger, disease, homesickness, harsh winters and spirits both broken and swigged.

In this book, focusing specifically on the local Confederate encampments, renowned author and historian Michael Aubrecht draws from published memoirs, diaries, letters and testimonials from those who were there to give a fascinating new look into the day-to-day experiences of camp life in the Confederate army. So huddle around the fire and discover the days when the only meal was a scrap of hardtack, temptation was mighty and a new game they called 'baseball' passed the time when not playing poker or waging a snowball war on fellow compatriots.