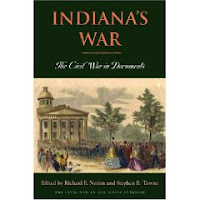 From the publisher:
Indiana’s War is a primary source collection featuring the writings of Indiana’s citizens during the Civil War era. Using private letters, official records, newspaper articles, and other original sources, the volume presents the varied experiences of Indiana’s participants in the war both on the battlefield and on the home front.

Starting in the 1850s, the documents show the sharp political divisions over issues such as slavery, race, and secession in Indiana, divisions that boiled over into extraordinary strife and violence in the state during the rebellion. This conflict touched all levels and members of society, including men, women, and children, whites and African Americans, native-born citizens and immigrants, farmers and city and town dwellers.

Collecting the writings of Indiana’s peoples on a wide range of issues, chapters focus on the politics of race prior to the war, the secession crisis, war fever in 1861, the experiences of soldiers at the front, home-front hardships, political conflict between partisan foes and civil and military authorities, reactions to the Emancipation Proclamation, and antiwar dissent, violence, and conspiracy. Indiana’s War is an excellent accompanying primary source text for undergraduate and graduate courses on the American Civil War. It documents the experiences of Indiana’s citizens, from the African American soldier to the antiwar dissenter, from the prewar politician to the postwar veteran, from the battle-scarred soldier to the impoverished soldier’s wife, all showing the harsh realities of the war.

Richard F. Nation is an associate professor of history at Eastern Michigan University. He is the author of At Home in the Hoosier Hills: Agriculture, Politics, and Religion in Southern Indiana, 1810–1870.