Tell Me of Lincoln: Memories of Abraham Lincoln, the Civil War, and Life in Old New York 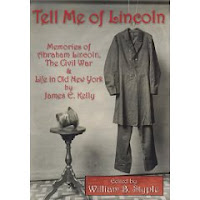 From the publisher:
Published for the first time! TELL ME OF LINCOLN is the long-awaited companion volume to 2005's GENERALS IN BRONZE, with over 50 never-before-published interviews with those who knew Abraham Lincoln, compiled by Artist James E. Kelly (1855-1933).

In 1900, sculptor and historian James Edward Kelly met with a New England gentleman who had heard Abraham Lincoln speak during his 1860 presidential campaign. The man remembered Lincoln as a strong and vigorous leader of men and not at all slack-looking, downcast or meditative as he was usually depicted by other sculptors. Inspired both artistically and historically, Kelly declared: "From that very moment, I became desirous of gathering material to justify me in making him an active, vigorous leader. My ambition was to model President Abraham Lincoln in bronze the embodiment of the spirit of the time as well as the men whom he led in triumph. From that very moment, I began to actively seek out any living witness who could tell me of Lincoln."

Kelly then conducted a series of interviews and correspondence with many well-known figures who personally knew Abraham Lincoln, and several veteran soldiers who had met or had heard the President speak, and even the common folk who simply caught a fleeting glimpse or passed alongside his casket.

Kelly recorded over fifty eyewitness accounts which he carefully preserved in his extensive notebooks hundreds of pages of highly significant oral history detailing Lincoln's physical appearance, personality, and qualities as a statesman. This testimony confirmed Kelly's belief that the real Lincoln was seldom depicted correctly in art. "Make him living! For he was one of the most all alive of men!" wrote Lincoln's Secretary William Stoddard.

TELL ME OF LINCOLN also contains Kelly's memories of growing up in New York City during the tumultuous time of the Civil War--eyewitness accounts of the Draft Riots and other important historical events in NYC.

After the war, Kelly worked as an illustrator for Harper's and Scribner's magazines, and depicted the daily life of New Yorkers. With an artist's-eye for detail, Kelly also wrote extensively about his life and his city and its people. His unpublished memoir contains vivid descriptions of the events in a city of contrasts, from life in the notorious Five Points to the affluent mansions on Fifth Avenue. Kelly's writings are a truly unique collection of fascinating essays that are part travelogue and part history--including interviews with several New Yorkers who knew Edgar Allan Poe. It has been said that what his friend and fellow-artist Frederick Remington was to the American West, James Kelly was to New York City. Primarily a historical artist, Kelly's studio on 57th Street was frequented by the famous figures of the era: Theodore Roosevelt, Thomas Edison, Winslow Homer, Mathew Brady, Oscar Wilde, Mark Twain, U. S. Grant, William T. Sherman, Philip Sheridan (along with nearly 40 Union Generals) and dozens of other notables were interervied and depicted in art by Kelly.

Above all, Kelly was a stickler for historical accuracy in his art, and spent more time interviewing his subjects about their personal exploits, rather than portraying them in oil or clay. Fortunately for students of Lincoln, Civil War buffs, and those interested in the history of New York City, Kelly carefully preserved his treasured notes.

In 2002, Historian and Author William B. Styple uncovered twenty-four boxes containing the unpublished memoirs of New York City Artist, James Edward Kelly (1855-1933). In 2005, Kelly's Civil War related interviews were published: GENERALS IN BRONZE, Interviewing the Commanders of the Civil War. This book was hailed as a Blockbuster history of the Civil War by Civil War Times Illustrated, June, 2005. TELL ME OF LINCOLN is the long-awaited second volume of Kelly material, and presents over fifty never-before-published accounts of Abraham Lincoln. William B. Styple has written, co-written and edited numerous works on the Civil War. He is currently writing the biography of Gen. Phil Kearny.