The Louisiana Tigers in the Gettysburg Campaign, June-July 1863 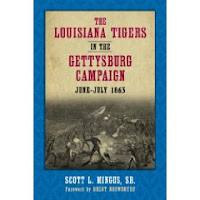 From the publisher:
Previous works on Confederate brigadier general Harry T. Hays's First Louisiana Brigade--better known as the "Louisiana Tigers"--have tended to focus on just one day of the Tigers' service--their role in attacking East Cemetery Hill at Gettysburg on July 2, 1863--and have touched only lightly on the brigade's role at the Second Battle of Winchester, an important prelude to Gettysburg. In this commanding study, Scott L. Mingus, Sr., offers the first significant detailed exploration of the Louisiana Tigers during the entirety of the 1863 Gettysburg Campaign.

Mingus begins by providing a sweeping history of the Louisiana Tigers; their predecessors, Wheat's Tigers; the organizational structure and leadership of the brigade in 1863; and the personnel that made up its ranks. Covering the Tigers' movements and battle actions in depth, he then turns to the brigade's march into the Shenandoah Valley and the Tigers' key role in defeating the Federal army at the Second Battle of Winchester.

Combining soldiers' reminiscences with contemporary civilian accounts, Mingus breaks new ground by detailing the Tigers' march into Pennsylvania, their first trip to Gettysburg in the week before the battle, their two-day occupation of York, Pennsylvania--the largest northern town to fall to the Confederate army--and their march back to Gettysburg. He offers the first full-scale discussion of the Tigers' interaction with the local population during their invasion of Pennsylvania and includes detailed accounts of the citizens' reactions to the Tigers--many not published since appearing in local newspapers over a century ago.

Mingus explores the Tigers' actions on the first two days of the Battle of Gettysburg and meticulously recounts their famed assault on East Cemetery Hill, one of the pivotal moments of the battle. He closes with the Tigers' withdrawal from Gettysburg and their retreat into Virginia. Appendices include an order of battle for East Cemetery Hill, a recap of the weather during the entire Gettysburg Campaign, a day-by-day chronology of the Tigers' movements and campsites, and the text of the official reports from General Hays for Second Winchester and Gettysburg. Comprehensive and engaging, Mingus's exhaustive work constitutes the definitive account of General Hays's remarkable brigade during the critical summer of 1863.

Scott L. Mingus, Sr., has written numerous books on the Civil War, including the two volume Human Interest Stories of the Gettysburg Campaign, its companion volume Gettysburg Glimpses: True Stories from the Battlefield; and Flames beyond Gettysburg: The Gordon Expedition, June 1863. He lives in York, Pennsylvania.