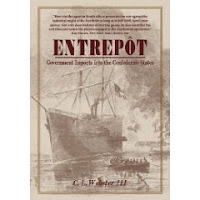 From the publisher:
Examining for the first time the history of civil war blockade running, this unrivalled compilation reveals the arms, equipment, and clothing brought into the Confederacy during the American Civil War. Detailed and comprehensive, this survey offers month-by-month, cargo-by-cargo descriptions of goods received at multiple locations across the United States. From Savannah, Charleston, and Wilmington to Matamoros, Galveston, and Mobile, this reference lists all distribution—the Belgian-made woolen cloth and English rifles that arrived in the farthest reaches of the Trans-Mississippi and the receipt of thousands of British knapsacks, blankets, and cartridge boxes in the winter camps of the struggling Army of Tennessee. A unique depiction of a perilous trade, this record sheds a dramatic light on the surprising pervasiveness of imported war material as well as the effectiveness and sophistication of the Confederate supply system.

C. L. Webster III is a historian specializing in the American Civil War and a practicing lawyer. He lives in Houston, Texas.