George Stoneman: A Biography of the Union General 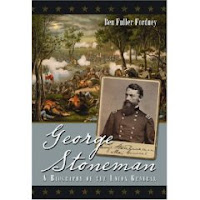 From the publisher:
During an 1865 raid through North Carolina, Major General George Stoneman missed capturing the fleeing Jefferson Davis only by a matter of hours, timing somewhat typical of Stoneman’s life and career.

This biography provides an in-depth look at the life and military career of Major General George Stoneman, beginning with his participation in the 2,000-mile march of the Mormon Battalion and other western expeditions.

The main body of the work focuses on his Civil War service, during which he directed the progress of the Union cavalry and led several pivotal raids on Confederate forces.

In spite of Stoneman’s postwar career as military governor of Virginia and governor of California, his life was marked by his inability to reach ultimate success in war or politics, necessitating a discussion of his weaknesses as a commander and a politician. Period photographs are included.