George Thomas: Virginian for the Union 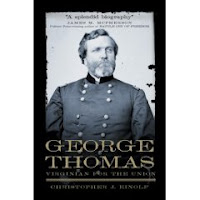 From CWBN:
Remembered as the "Rock of Chickamauga," Thomas was so effective he became one of the most prominent Union generals and at one point was considered for overall command of the Union Army. Yet he has been eclipsed in fame by such names as Grant, Sherman, or Sheridan.

Offering vivid accounts of combat, Einolf depicts the fighting from Thomas's perspective to allow a unique look at the real experience of decision making on the battlefield. He examines the general's recurring confrontations with the Union high command to make a strong case for Thomas's integrity and competence, even as he exposes Thomas's shortcomings and poor decisions. The result is a more balanced, nuanced picture than has previously been available. Einolf also explores Thomas's schooling at West Point, early military service in the Seminole and Mexican wars, and his postwar life--notably his service as a military commander in Tennessee protecting freed slaves from the terror of the Ku Klux Klan.

Christopher J. Einolf is the author of The Mercy Factory: Refugees and the American Asylum System.