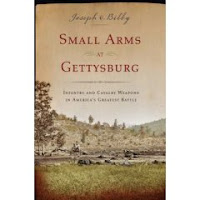 From the publisher:
The three-day battle of Gettysburg has probably been the subject of more books and articles than any other comparable event. Surprisingly, until this work, no one has analyzed the firearms and other individual soldier's weapons used at Gettysburg in any great detail. The battle was a watershed, with military weapons technologies representing the past, present, and future--sabers, smoothbores, rifles, and breechloaders--in action alongside each other, providing a unique opportunity to compare performance and use, as well as determining how particular weapons and their deployment affected the outcome and course of the battle.

Small Arms at Gettysburg: Infantry and Cavalry Weapons in America's Greatest Battle covers all of the individual soldier's weapons--muskets, rifle-muskets, carbines, repeaters, sharpshooter arms, revolvers, and swords--providing a detailed examination of their history and development, technology, capabilities, and use on the field at Gettysburg. Here we learn that the smoothbore musket, although beloved by some who carried it, sang its swan song, the rifle-musket began to come into its own, and the repeating rifle, although tactically mishandled, gave a glimpse of future promise. This is the story of the weapons and men who carried them into battle during three days in July 1863.

Joseph G. Bilby served as a lieutenant in the 1st Infantry Division in Vietnam in 1966-1967. He is a columnist for Civil War News, assistant curator at the National Guard Militia Museum of New Jersey, and is author of A Revolution in Arms: A History of the First Repeating Rifles, also available from Westholme.